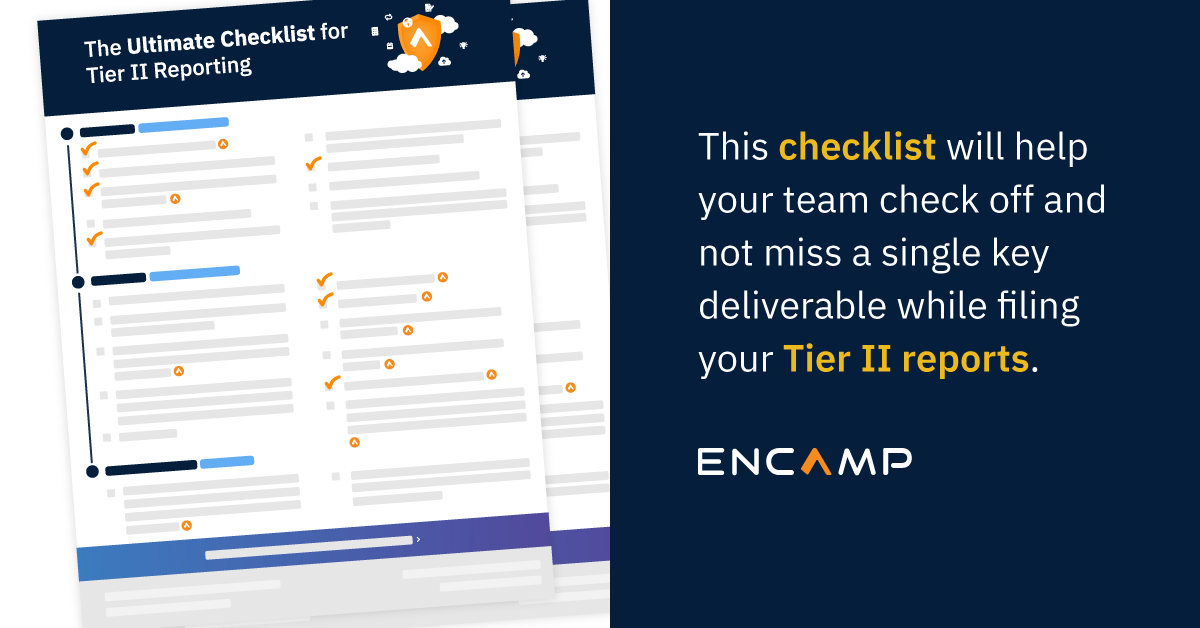 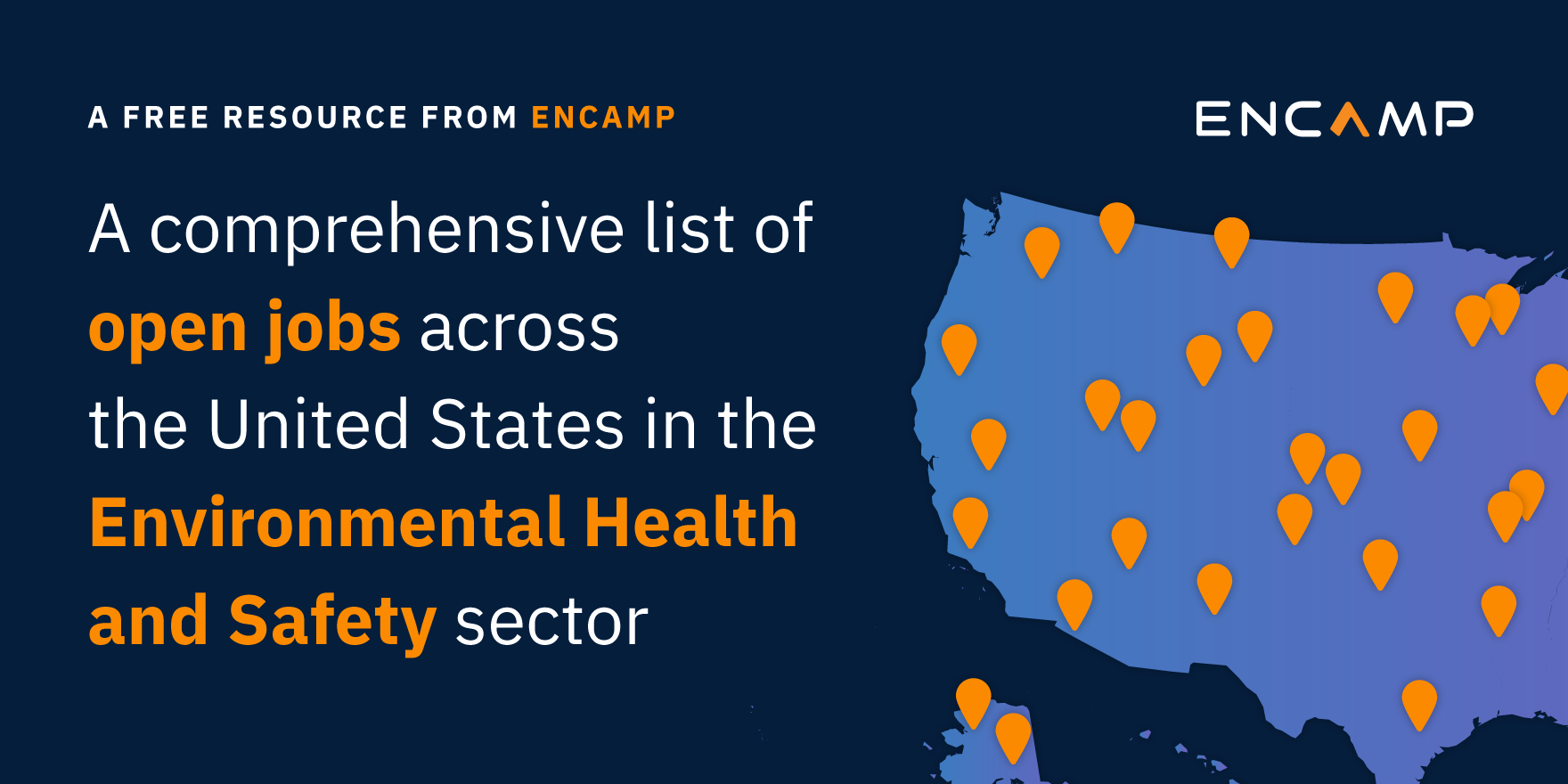 Comprehensive list of open jobs across the United States in the Environmental Health and Safety sector. 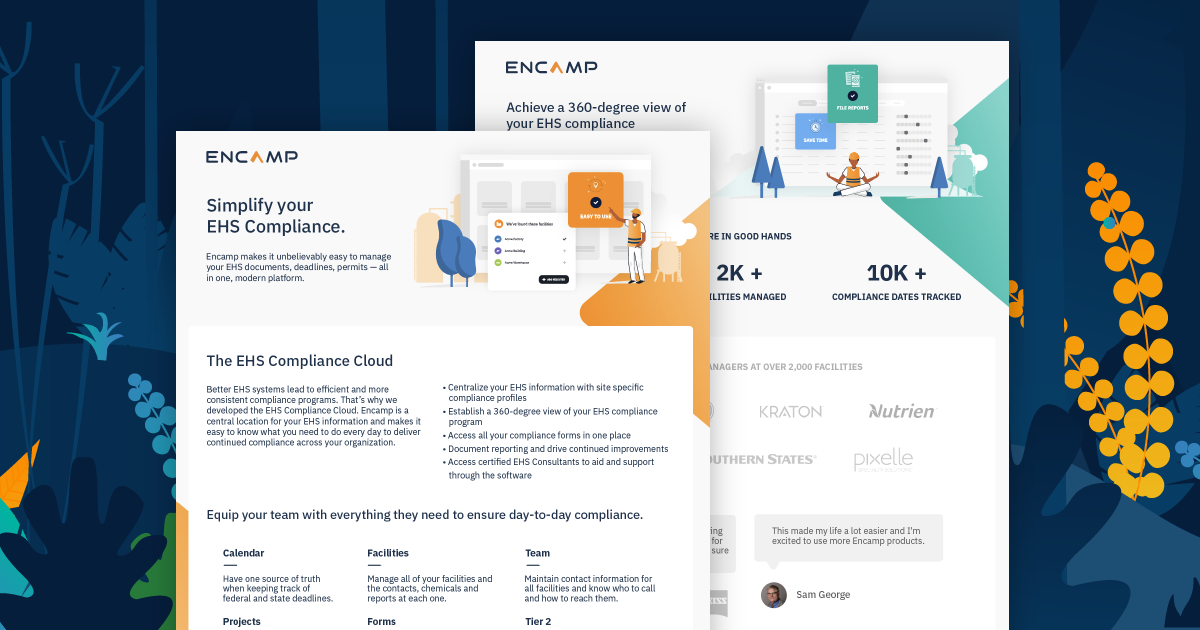 Learn how Encamp can simplify your EHS compliance in this easy to read document.

EPCRA is short for the Emergency Planning and Community Right to Know Act of 1986. It's one of the most important programs that EHS professionals should be aware of.

EPCRA relates directly to Tier II reporting and TRI reporting — the reporting of toxic and hazardous chemicals. The EPCRA definition of reportable quantities and the toxic EPCRA chemicals can be found in the EPA List of Lists. Regardless, the general EPCRA definition is of an act passed in 1986 to ensure that organizations have the right preparedness and response when dealing with chemicals. EPCRA TRI breaks down these chemicals on a more granular level.

Companies interested in learning more about Toxic Release Inventory (tri reporting) and Tier I and Tier II reporting can look up EPCRA facts and EPCRA FAQs. Either will explain the general basis of EPCRA, which is a multi-pronged approach involving disaster preparedness, release reporting, chemical storage reporting, and chemical use reporting. There are 767 chemicals that are covered within the EPCRA that need to be reported, but there are also requirements an organization has to meet before reporting is required. Most very small businesses will not meet EPCRA reporting standards, as businesses will need to have at least 10 full-time employees or their part-time work hour equivalents.

Companies trying to maintain their EPCRA compliance can apply for EPCRA grants to cover the cost of such a major transition..

Is EPCRA part of CERCLA? These are two separate things. CERCLA is the Comprehensive Environmental Response, Compensation, and Liability Act, and it is more focused at ensuring that any releases that do occur are handled in the right way. EPCRA does encompass some of this, but it also includes preparedness and training to ensure that these types of releases do not happen. CERCLA was an act that was passed in 1980, six years prior to EPCRA. It helps in both the investigation and cleanup of sites where releases have occurred.

There are many sections of the EPCRA. Section 313 of the EPCRA created the TRI program, which also includes NAICS codes. If an organization does not meet SIC codes based on its industry and work, it does not need to report, but it does need to check. The EPCRA Section 313 list covers which chemicals are included in the Toxic Release Inventory and whether an organization needs to track them. EPCRA Section 313 Form R is the TRI reporting requirement that is for chemicals being on-site at any time during the year.

Toxic Release Inventory Reporting is essential to a business, ensuring that it keeps the environment and its employees safe. It is part of the 1986 act that was intended to counter many major disasters, under which chemical spills were able to cause widespread damage not only to the environment, but also the people living within it.

But because there are so many chemicals to track, and it isn't always clear whether a business needs to count something as a release. These guidelines are provided to ensure that companies know what constitutes a hazardous release, which chemicals are hazardous, and in which quantities they are hazardous. Altogether, that eliminates the guess work on the company's part, while also providing for far more rigorous standards for companies to adhere to. If companies are found to be in violation of the EPCRA, they can face heavy fines and penalties, which can then be used to enforce clean up and restoration of the environment, as well as any liabilities to those who may have had their health impacted.

It's not enough for spills and releases to be reported to the federal government. Local agencies have to be empowered to act swiftly. This is why the EPCRA Section 302 and EPCRA Section 302 chemical list is so important. Section 302 mandates that hazardous substances have to be reported to the state, to the state's planning committees, and to local fire departments. Thus, the state itself is able to make plans in the event that a chemical release does occur.

It cannot be the company alone that is planning for a disaster. Not only do company plans sometimes fail, but the state has to be able to mobilize and use its own resources to protect the population of the state. In the past, companies were often left to their own devices when it came to these types of disaster initiatives. This could lead to thousands of impacted citizens not even knowing that they had been impacted for weeks, or even years. But because companies are now being asked not only to self-police but to report, it's less likely that these types of disasters can happen.

Companies should be well aware of the EPCRA Section 302, because it's so critically important to the way they operate. Not only do they need to work with the local government to ensure that they understand the risks of the chemicals that they are using, but they also have to be proactive about developing plans that are going to help them in the event that an incident does occur.

Apart from Section 302, there are sections that govern which companies fall under the EPCRA to begin with, and federal reporting standards. By going through the EPCRA in totality, an EHS professional will be able to ensure that they have met their reporting standards and requirements, and that everyone is prepared in the event that a disaster does occur. It's not possible to predict whether a disaster will occur, and there are always failure points in even the best contained systems.

How to Determine Reportable Quantity

What is a reportable quantity? There's the CERCLA release definition, CERCLA release reporting, and CERCLA section 103, as well as multiple EPCRA sections, and EPCRA amendments, as well as the EPCRA Section 311 exemptions. So how can a company determine whether a release has occurred? Companies need to be able to track their chemicals on a granular level, and they should have processes in place for reporting all releases, and subsequently (and quickly) determining whether these releases are urgent in nature.

EPCRA provisions are written for specific chemicals and their quantities, which means that companies need to be able to track which chemicals they're using, and need to be able to look up the toxicity based on that material. Thus, chemicals that are more toxic than others are going to have lower reporting thresholds. But this highlights the need for companies to be on top of their chemicals, to understand when chemicals are being used, and to know exactly how much has been released.

What is the history of EPCRA? This comes from Bhopal and EPCRA. In 1986, EPCRA was created following the Bhopal disaster, during which thousands of citizens were exposed to harmful chemicals.

Bhopal is known as being the worst industrial disaster. Following the actual event, in 1984, it's suspected that over 16,000 people died. 500,000 people were exposed to toxic gas. While it's not known exactly what caused the disaster, it is theorized that a lack of maintenance caused the issue. Regardless, there had been previous complaints about leaked gas at the plant, and there were known issues with chemical releases previous to the disaster. Contamination also remained within the area, though it was arguable as to whether this contamination impacted the surrounding environment.

EPCRA does a few things. Foremost, it ensures that people are notified when an incident does occur. That is the "Right to Know" part of the act: Citizens have a right to know, swiftly, if they are being impacted by toxic chemicals.

Second, it ensures that companies take action to track their chemicals thoroughly and plan for potential disaster. During the Bhopal incident, it was believed that a lack of routine maintenance, and issues with annual safety audits, could have contributed to a culture of mismanagement.

Third, it ensures that government agencies are notified of potential breaches quickly. Together, the EPCRA creates a much safer environment, for the environment, for employees, and for those who are around the company.

That being said, EPCRA planning can be complicated, because companies do need to do so much reporting. There are many reporting requirements attached to EPCRA, and this can be difficult for a company that uses a multitude of different chemicals throughout a variety of applications. To alleviate this, there are compliance platforms that are designed to track chemical use, and to help alert during a potential release. Companies that are working towards achieving greater EPCRA compliance can sometimes apply for an EPCRA grant. Either way, they do need to maintain compliance (if required to) to avoid strict penalties.