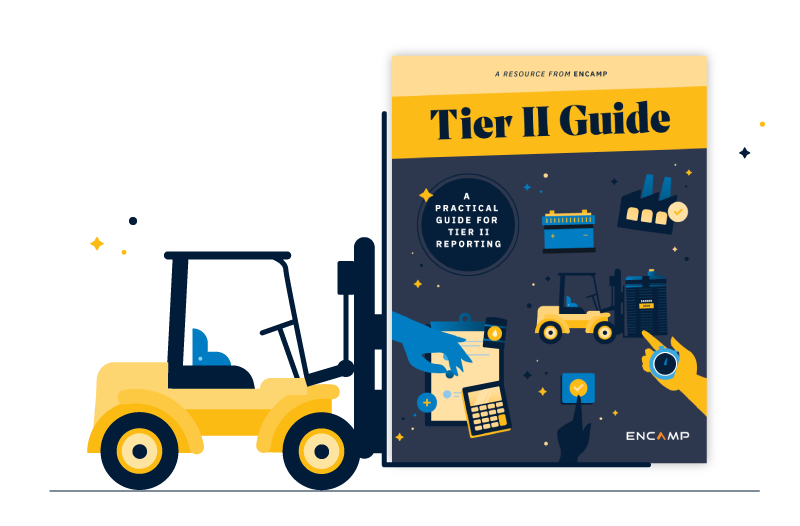 In the world of EHS and compliance, Tier II reporting is everything. Now there’s a Practical Guide that tells you everything you need to know.

In the United States, the Environmental Protection Agency (EPA) is the entity in charge of policies that govern the environment and the health of the inhabitants of the country. There are various laws and acts that are included under the jurisdiction of environmental policies. Some of these include the Clean Air Act (CAA), Clean Water Act (CWA), and NEPA. The National Environmental Policy Act of 1969 (NEPA), was put in place to create a council to oversee environmental policy and verify quality.

When was the Clean Air Act passed? The Clean Air Act of 1963 was the original bill of this name but there was actually a predecessor bill passed in 1955 called the Air Pollution Control Act. Since the Clean Air Act was passed, there have been several amendments to the bill. The Clean Air Act definition is a list of laws and amendments that seek to regulate the emissions that enter our air from factories, automobiles, stationary and mobile sources of emission. Overall, the US environmental policies seek to govern and oversee activities that can impact the environment in a negative way. Using the most advanced scientific data that we have available, mandates are made to not only mitigate damages but to change procedures in the hopes of improving the environment. We recognize that human activities can have a direct impact on the environment and our research in these areas is ongoing. With new technology and advanced knowledge, we're moving in the direction of using more eco-friendly alternatives where possible.

The National Environmental Policy Act of 1969 (NEPA) covers a range of actions. The policy was signed into law in January of 1970 and it established the President's Council on Environmental Quality (CEQ). This body is designed so that federal agencies can assess environmental effects before making any decisions or regulatory changes.  They oversee things like the constructing of highways and publicly owned facilities and making decisions on permit applications. They also oversee federal land management. Through NEPA, the public can review the evaluations and decisions made regarding environmental regulations, offering full transparency.

What regulations has the Trump administration cut? According to Trump environmental accomplishments of his administration include modernizing the 50-year-old law to streamline the process for construction. The national environmental policy act, updated in July 2020, accelerated the federal review process to diminish the wait time on construction projects. Critics believe this will be detrimental to the environment.

The environmental laws in the US include the Clean Air Act. There is a clean air act pdf put out by the EPA to help explain this complex law in a more understandable way. The Act was created to establish federal standards that guide sources of air pollution. It also established a cap and trade program for the emissions that cause environmental hazards, such as acid rain.

The environmental movement timeline in the US started in 1948 with the Federal Water Pollution Control Act. Since then, environmental laws and policies have continued to evolve. As new technology impacts the environment and scientific data is gathered to showcase effects, bodies like the EPA are tasked with assessing the possible repercussions and defining ways to limit the damage. As the list of environmental policies expands, new environmental laws continue to be created. This is why it's imperative that every company stay up to date with new changes and regulatory requirements.

Is the Clean Air Act still in effect? There have been changes to the Clean Air Act, notably as it relates to fossil fuel, under the Trump Administration. The Clean Air Act itself is still a law, but the EPA has changed the classification of fossil fuels which also changes the mandated limits on emissions. Some opponents believe this will have a negative impact on air quality. Other proponents for this change believe that it simplifies a complex law and makes it more understandable. 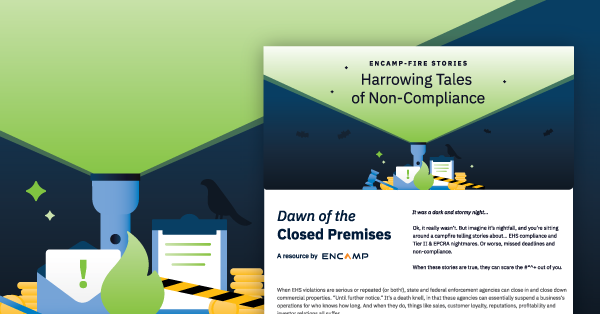 When EHS violations are serious or repeated (or both!), state and federal enforcement agencies can close in and close down commercial properties. 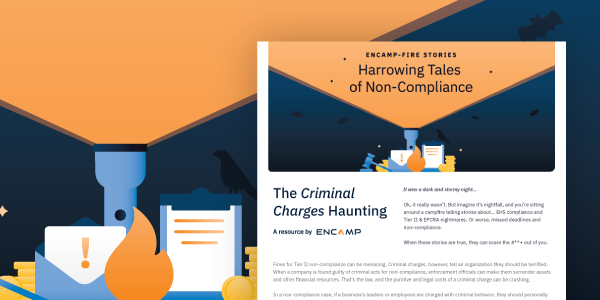 When a company is found guilty of criminal acts for non-compliance, enforcement officials can make them surrender assets and other financial resources. 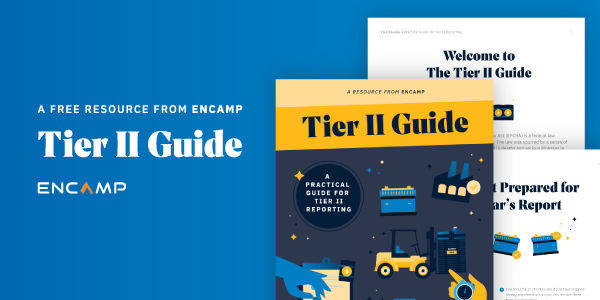 When a Practical Guide for Tier II Reporting Really is Practical In the realm of EHS and environmental compliance, Tier II reporting is everything. And it’s the law. This eBook Practical Guide tells you everything you need to know about Tier II. We just call it the Tier II Guide.

The list of EPA regulations includes atomic energy, beaches, environmental assessments, chemical safety information, the coastal health act, fuels regulatory relief, and the Clean Air Act among many others. As you can see, the list of environmental laws and regulations encompasses every facet of civilian, public, and corporate life. Individual citizens are tasked with testing the emissions of their cars as a part of being able to legally maintain their licensing. Corporations are tasked with meeting regulatory requirements for machinery and other aspects of their products which can impact the environment.

Environmental policy issues in 2019 were full of changes. The Trump administration set out to streamline regulatory requirements, especially where fossil fuels were concerned. Their stated goal was to loosen needless restrictions to allow for business growth. Many opponents saw these measures as counterintuitive for the environment. Some examples of Trump's rollbacks in 2019 included the clean water rule, the methane gas emissions regulations, and the regulations on endangered species.

Here is a quick list of some of the environmental laws and regulations:

This is not a full list. There are numerous laws and regulations that relate to the environment and the way that human beings live and do business. These regulations are necessary and they keep evolving. For instance, the Atomic Energy Act was created in 1954. Atomic energy was relatively new and the possible implications of using this technology could be life-altering to the environment for many generations. At that point in time, scientists were still unsure how long the effects of the atomic bomb would last on the locations and the inhabitants where it was detonated. The establishment of the Atomic Energy Commission sought to find out how to safely use atomic energy in a way that benefitted humanity. They were tasked with researching and documenting the best ways to maintain and dispose of atomic materials.

Other acts that you may be more familiar with include the Clean Air Act and the Clean Water Act. Each industry also has its own compliance requirements. Many industries may never need to maintain records related to the Ocean Dumping Act, for instance. Most people will be aware of the Clean Air Act as it impacts all industries and even private citizens.

US environmental policy history is often quoted as starting in the 1940s but the origins of concern with the environment go back much further than that. The Rivers and Harbors Act of 1899 was the first environmental act on record. That act was eventually superseded by a much more robust Clean Water Act. While environmental laws and regulations became more robust in the latter part of the 20th century, specifically from the 1960s through the 1980s, there were still concerns about the environment in much earlier generations.

As far back as the 1700s inhabitants had concerns over pollution to the natural landscape such as rivers and wildlife. In the United States, we saw the depletion of wildlife, such as the Buffalo. Laws were enacted to help the country prosper and flourish but not necessarily to protect the environment during this time. The Homestead Act, for instance, gave immigrants, women, and the displaced a chance to own and operate the land as the country expanded west. Many suspected that the massive amount of prairie plowed into fields over the course of time contributed to the environmental impact that caused the dustbowl in the early 20th century.

Early into the 20th century, concerns over the environment grew exponentially as industrialization added to the pollution of the air and waterways. With the addition of automobiles, diesel engines, and simply the addition of more people in smaller areas, the United States saw drastic increases in pollution-related smog. Many of these issues are currently improving due to measures that regulate air quality on personal and corporate levels. There are also regulatory requirements in place for manufacturers dealing with chemicals and using machinery with emissions.

We know that human actions have an impact on the environment. Earlier generations could see this, as well, but they were limited in scientific data and laws were slow to change. Modern US environmental policy stemmed from the need to protect the environment from many of these actions which were causing obvious decreases in quality of life. We can visually measure the difference in air quality since the Clean Air Act has been enforced. We can see the wildlife return to places where they are protected.